Accutech Security (Accutech) was founded in 1985 as Innovative Control Systems. They are a leading manufacturer of advanced electronic monitoring and security system. Accutech specializes in RFID-enabled systems to track the movement of people and provide immediate notifications if the person leaves a designated area.

Like many companies, Accutech was having difficulty tracking activities on prospects and engagements. They worked with Better Partners to identify and model a standard for their sales process and activities. Better Partners also helped Accutech identify thousands of accounts and contacts imported from via various initiatives that did not fit in Accutech’s new sales process. These records were reviewed, exported, and deleted from salesforce. The export was then used to create the 70,000 records as Leads to support their new sales process, ensuring that they were properly vetted before assigning them to sales team members.

Better Partners reviewed Accutech’s KPI and built a series of reports and dashboards to manage and monitor the company’s sales team progress. This included scheduling reports to help their users and managers stay up-to-date on sales activities and their sale engagements.

The improvements enabled Accutech to introduce a new product line which increased their revenue by 33% while maintaining without increasing the size their sales team.

Brian Kwong
I've been working with Salesforce environments since 2007 and – within the community – I'm known as the “Salesforce Wizard.” I'm a Salesforce: Certified Developer, Certified Administrator and Salesforce MVP (Winter ‘13 release). I've presented at the Annual Dreamforce Convention from 2012 to 2016.
Recommended Posts
Contact Us
Phone: +1-414-375-8484
Address: 790 N. Milwaukee Street Suite 300 Milwaukee, Wisconsin
Email: BeBetter@betterpartners.com
Search
Connect With Us
Latest News
ABOUT US

We’re an experienced and award winning consultant agency. We audit, implement, optimize and manage your CRM processes to make your business better. 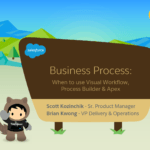 When to Use Salesforce Flow, Workflow and Apex | Dreamforce 2016CRM Management 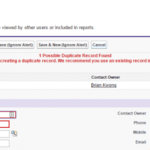 One Simple Way to Prevent Duplicate Data in SalesforceCRM Management